Running Track Has A Ton Of Benefits

I bet you are wondering what to do after your volleyball, hockey, or basketball season is finished.  You think that you might just start strength training, or maybe you just continue with Spring hockey, or a volleyball or basketball camp.

While these might seem like the obvious choices, and maybe the easiest choices, if you are training to be be fast, and work on top end speed, or you want to improve explosive power, then you may not be making the best choice for your goals.  It’s been argued in many scholarly athletic development articles, like “Sport Specialization for young athletes” published in National Center for Biotechnology Information, that elite athletes in sports other than gymnastics,  were more likely to initiate intense training later in adolescence (1).  In other words, let your off-season, actually be an “off” season.  Get off the ice, get off the field, get off the court, where you just spent the last 5-8 months of your life.

“Some degree of sports specialization is necessary to develop elite-level skill development. However, for most sports, such intense training in a single sport to the exclusion of others should be delayed until late adolescence to optimize success while minimizing injury, psychological stress, and burnout.” (1)

Don’t get me wrong, I am all for athletes to train hard, if they want to, and if they can.  But youth and adolescent athletes are often influenced by parents who are so passionate about a particular sport, that it may skew their perspective on what their child needs, and coaches who often aren’t interested in the proper development of the individual athlete, but merely want THEIR program to be successful.  These influences weigh very heavily in a conscious, and subconscious manner on the youth or teen athlete.  Significant decisions are made, not based on what is truly best for their long term athletic development, but what strong adult presences in their life want.

I’ll give you an example:

During the spring months (from April to end of May), our community runs a 3 on 3 hockey league for players ages 6-14.  I asked, (well maybe more encouraged) my son and daughter to both play.  They have tryouts coming up soon and I wanted them to be ready for those at the end of April.

Then I got to thinking…do they really want to play MORE hockey?  After a long season already, is this the best thing for them, or are they just saying what they think I want to hear?

So I asked them in a different manner.  I said, ” Do you guys want to play 3 on 3 hockey, or would you rather ride your bikes and play in the backyard?”.  Well guess what they said.  A resounding majority answer of “Ride bikes!!”.  And I left it at that.  Albeit, my kids are 6 and 7 years old, but I think that there may be many older athletes who are pressured into making certain decisions as well.  Parents and coaches have a profound effect on the psyche of children and can manipulate actions with certain language or prompts, without even realizing.

It is important to provide rest from the repetitive motions that continually place stress on their body. Strength and conditioning can be an option when an athlete is considering a rest from their specific sport. This can provide an opportunity for injury rehabilitation, injury prevention, and enhancing long-term health. With proper supervision and a well-designed program, a youth resistance training program can improve body composition, increase bone health, and decrease injury (2).

However, I think there could be a better option when seeking out early off-season training for high school athletes.  Don’t get me wrong, I love it when we get an energetic, enthusiastic athlete walking in our doors and wants nothing more than to start gearing up for his/her fall sport.  I truly believe at some point that all dedicated athletes need a properly constructed strength and conditioning program to become better at their sports.  That being said, getting in the weight room at a commercial gym, or a specialized athletic development facility isn’t the only possibility to help develop some of the essential athletic skills that ultimately translate into sport success.

Our resident track coach extraordinaire, and local high school track coach, Derek Quigley has outlined a few benefits of competing in track and field.  Derek was a part of three national championship, and 5 provincial championship track and field teams at the University of Windsor, so we reckon he knows a thing or two about the sport and its benefits.

Derek believes that track can offer numerous benefits to all athletes, and especially dynamic athletes looking for some early off-season training, and a break from their “main” sport.

1) Improve top end speed- We consider speed to be an very important aspect of athletic development.  Most of the time we train speed in short distances (10m-20m).  This is considered to be more acceleration training than top end speed training.  In many sports, acceleration dominates, as athletes very rarely will get up to or require top end speed.  However, athletes should have this tool in their belt, when they require maximal speed for any length over 10m.   Sports like soccer, football, and hockey come to mind.   Top end speed is also very hip dominant in nature.  In the picture below we see how far behind the hips the balance foot is at push-off. Pure hip dominance and hyperextension! What do vertical jumping, broad jumping, planting, cutting, braking, balancing, a hip turn, crossover step, swinging, throwing etc. all share in common? The need for powerful and strong hips, and top speed work serves a great specific source of training for improving this ability.

2) Improve explosive power- Power has traditionally been thought to be more important for athletic performance than either strength or size because it is one indication of the ability to produce force quickly. Additionally, some researchers have found correlations between the ability to produce high power outputs and specific measures of athletic performance (3).   Most investigations assessing the correlation between muscular power output and playing ability level have reported significant relationships (3).  Therefore it can be concluded that power is a great indication of athletic ability and can have a significant affect on athletic performance.

Here are a couple of drills we use to develop explosive power in our athletes. 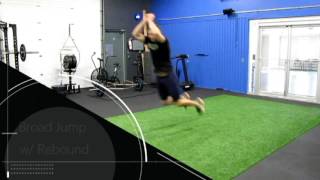 3) Develop/improve movement mechanics and enhance fluidity and rhythm- Staying relaxed and moving with purpose are what separate elite athletes from the others.  The ability to control movements through various ranges of motion and be efficient with those movements allow athletes to run faster, jump higher, hit further and with more accuracy, and become all around better performing athletes.

Running and jumping mechanics like the ones in the videos below, when practiced consistently, will teach athletes to control their bodies and create efficient movers. 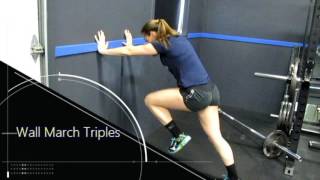 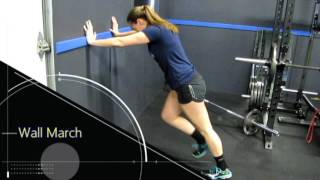 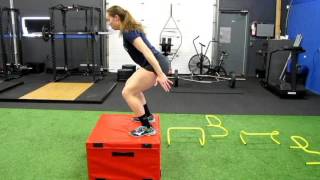 4) Individualize your challenge and compete against yourself- This is my favorite point that Derek makes.  Track is almost an entirely individual sport.  Sure you have teammates, but you are accountable to yourself, and you will only see improvements if you push yourself to compete and get better.  Because track results can be determined by mere millimetres or milliseconds, they are recorded consistently.  This means that athletes always have a measuring stick to determine whether they are improving or not.  If an athlete hits a wall and improvements are plateaued, it’s up to the athlete (and the coach often times) to dig deep and find out why the progressions have slowed or stopped.  You are in charge, and can’t blame anyone else for your lack of success.  On the flip side, you are almost solely responsible for your astounding achievements as well, which can be very rewarding.

If you are thinking about how you can make the starting lineup on your basketball team next year, or earn your spot on your hockey team’s powerplay, or improve your ability to get kills for your volleyball team, look no further than your spring season of track and field.  Differentiate yourself among a sea of athletes who don’t want to work as hard as you do, and put in the time away from the rink, field or court.  Become a great all around athlete so you can dominate your specific sport next season!