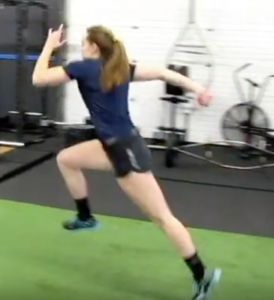 Speed Is the Name Of The Game

Is there a difference between acceleration and speed?  While at moments, the two may seem to co-exist, there are some distinct differences between top end speed and acceleration.  The goal of most athletes should be to develop both, separately, and congruently.

Most sprints in sport take place in what is deemed the acceleration phase of a sprint, which is typically less than 30m.  On a couple of the largest playing surfaces (rugby and soccer), the average sprint distance is between 10-30m.  If you compare that to smaller surfaces like hockey, baseball, basketball, etc, it is pretty clear that acceleration speed is the phase most used by athletes.

Does that mean athletes shouldn’t train in maximal speed distances?  Or only focus on short bursts and change of direction, into acceleration?

The answer is no.

Although longer distance sprints occur much less frequently in team sports than short sprints,  maximum velocity is usually reached when a sprint is initiated from a moving start. Therefore, as a majority of sports are inclusive of sprinting,  sprint ability (i.e the ability to accelerate quickly, achieve a high maximal running velocity and also the ability to maintain maximum velocity) can be deemed vital for sporting performance.  Furthermore, sprint ability often delineates between players at different competition levels, in that more elite athletes tend to be faster, thus enabling them to reposition themselves more quickly during critical match/game situations. 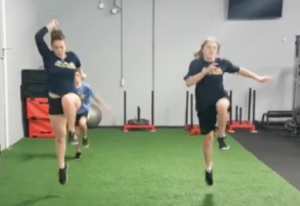 3 Variables that exist in training sprinting and max velocity work

Prerequisites and Preparation—Maximal sprinting without having the capacity to do so is a recipe for disaster. One shouldn’t jump into a sprinting program on day one, but waiting for months is equally bad as it removes a quality that eventually needs to be challenged. Solid lifting and some light plyometrics—along with a sound running program—should be enough to transition into speed training.

Technical Proficiency—Technique or running mechanics helping with reducing injuries can make a world of difference.  Sometimes the slightest of cues or corrections can mean milliseconds or seconds shaved off of times immediately.

Some skills we like to teach to enhance speed development are:

During sprinting, the hip extensor muscles (hamstrings, adductor magnus, and gluteus maximus) produce the majority of their force while the foot is in contact with the ground.  When we train using high-velocity exercises, like bounds, and squat jumps, we improve the ability to produce force at high velocities to a much greater extent than against very heavy loads, which require low velocities.

A stiffer leg spring will allow the attainment of higher vertical ground reaction forces , facilitate the storage and return of elastic strain energy and increase step rate via a reduction in ground contact time.

Readiness to Sprint—Resting from speed work and timing when to sprint is the name of the game when getting faster. Injury prevention using sprints requires fatigue-free training so that the cure doesn’t become a poison.

All three of these factors should be considered and examined before a sprint program is developed for any athlete.

So to answer the question from the beginning of the article, should you train speed or acceleration?  The answer is both.  Despite acceleration being more useful in game situations, developing max velocity and top end speed will transfer into increasing ground force contact, rate of contact, and enhance mechanics that will be useful to other speed components and phases of acceleration.

Exercise As A Prescription